The Greatest of All Friends 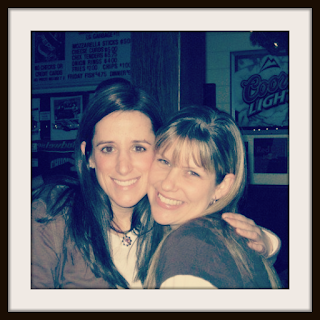 About nineteen years ago I showed up at the house of a stranger because the guy I was dating said his friends were having a Game Night. We played Catch Phrase. When it was his turn he started describing the word we had to guess in order to win the point:

And everyone started guessing various body parts except the obvious one as he kept going on and on about how small these were and they're not big and by this point people are awkwardly looking at the ground whispering things like collar bone and ankle even though everyone was thinking breasts but no one wanted to be the jerk who said it.

The word was mounds. I left that night bound and determined never to see any of those people again.

Except the hostess stalked me like a crazy person and basically demanded that we be friends whether I liked it or not. And that's how Kim became my best friend in the entire world. Because she forced me.

She was engaged and worked ridiculously hard and I was dating the red flagged mounds guy, and still she wanted to be friends. She was considered lake people and I was not considered much at all because I lived in this farm town that no one ever really went to - that was before we got the Walmart, but still she dragged me into her world.

She took me to Book Club and MOMS Group (Ministering our Mothers Spiritually, or something like that). She invited me to her parent's house on the lake for 4th of July and to New York City for her bachelorette party. We found we shared interests like drinking tea because we hate the taste of coffee (I know) and we were also very different because she climbed Mt. Kilimanjaro and I hated climbing stairs to the second floor.

Her brunt, to-the-point opinionated style of conversation was refreshing. I always knew where I stood with her. She was the first person that if I disagreed with her it wasn't a big deal. Nothing was a relationship breaker. I could, unapologetically, be myself. That is the very best kind of friend to have: the kind that know your flaws and love you anyway.

We were going on day trips and mini vacations together, laughing and complaining about normal things when suddenly Avery died. I was alone in the house with my 3-year old. The office said I needed to call someone. I looked at him not understanding. "Who is your rock?" "Kim." "Let's call Kim."

I know it was a God thing. Kim was at work and she never has her phone on her and yet there she was, upstairs in that office where her phone was. She answered. I don't know what I said. I can't imagine I informed her gracefully. But I turned around and there she was, in my house. I still have no idea how she got there so quickly. But she was there.

Sometimes I think about what a jerk friend I am, having my kid die. Like, who signs up for that? She did things that, to this day, I do not have a full account of. I know somehow people were informed and there was food at the luncheon and she took my son trick-or-treating and made sure I didn't go crazy.

I don't understand how she does it. She just does.

After Avery died her mother was diagnosed with Stage 4 Pancreatic Cancer. Kim was there. Doing what she does: the hard stuff. Six months later her mother died.

After that her Dad was diagnosed with Alzheimer's disease. And she stood up to the task of caring for him. All the appointments, all the medication, all the laundry, all the tracking down when he got lost and couldn't remember his way back. It's like she refuses to let the hard stuff win.

She's tough and strong and loves her family with an undeniable fierceness. And me, too. Because she keeps holding me up through all of this.

On August 27th, we had our annual Avery Step You Take 5K to raise money for  AVERYday Ministries, the nonprofit we started in Avery's memory. Kim was right there, the Queen of Organization, making sure the volunteers knew what they were doing, the route signs were placed properly, the tables set up, all the forms ready for day of registration participants. She said she tweaked her back so she couldn't do any heavy lifting. She lied.

She explained she hadn't wanted me to worry. That was Avery's day and she didn't want to take the focus off that. She told me she had cancer in her breast and there were things that would need to be tested to know what the full treatment would be, but the second opinion confirmed, and the mastectomy is scheduled for October 14th. Her mother's birthday.

My best friend in the entire world has cancer. And she shouldn't.

And she's been through so, so much. Avery's death. Her mother's death. Her father's difficult diagnosis. I'm faith filled and I know God has a plan and a purpose but why this? I just don't understand. And I don't know if I ever will.

But I know one thing to be absolutely true and certain: this is just another adventure to navigate in our friendship. Not the one we planned on, and certainly not the one that gets the final say.

Bridget McCarthy
I'm just a normal mom trying to deal with the unexpected death of my daughter, Avery. Avery passed away on October 24, 2012... 19 days after we celebrated her 11th birthday. I still enjoy my 26-year old daughter, Jadrian, and my 12-year old son, Brody, here on earth. I couldn't get through this chapter of my life without God and without my amazingly supportive readers.