Child, You Have My Full Attention 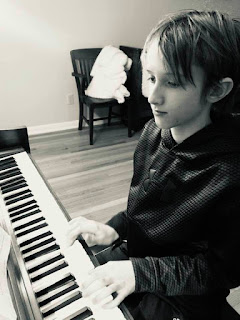 Our one constant growing up was arguments revolving around excessive alcohol consumption. My father would be the "fun guy" out with his friends after work and during the weekends, then get to that tipping point and head home to finish things off. We experienced the downside. (The part his drinking buddies weren't privy to.) He wasn't the "fun guy" for us. He was critical and angry, annoyed and distracted. He would come home to "fall asleep watching tv" (pass out). In fact, unless he was yelling, there was very little interaction.
My father's choice to regularly over-consume meant poor financial decisions that affected us all. My mother had to carry the brunt of responsibility raising us children while working full time and a part time job. (She had to make up for the money being spent at the bars and liquor stores.)
Any hope for a sense of self worth was distinguished through his constant criticism. No matter how well we did in any particular area he'd tell us what we should have done to earn an even better finish. He called it encouraging us. We felt it as we still hadn't earned a position of worth in my father's eyes. When people aren't happy with themselves they subconsciously tear others down to make themselves feel better. We were the bystanders who took the hits.
My father barely knew what grades we made, who our friends were, what our interests were, especially as we got older and in high school. By that time he had been so selfishly living his own life that we really didn't understand the need for him when he suddenly piped up with some bit of advice.
Some classmates got to know him and, while there were some that thought he was really cool for passing out beer in the auto shop where everyone hung out, most kids shook their head out of pity. "Is that your dad?" was a question that would send me reeling with embarrassment. He thought he was fun and happy; I saw him as loud, foolishly animated and trying too hard to cover up the fact he was drinking.
No matter how many times there'd be an argument explaining how this. is. not. okay. he would feel justified. He worked hard. We weren't starving. It wasn't like he was having an affair or asking for a divorce. He had a right to have friends. And, god, why can't you just relax? Maybe you could use a drink!
It didn't matter how many ways we would try to express how the negative ramifications his choices to regularly overconsume had on us as individuals, on our family. When faced with a choice it would always be the alcohol.
And so we simply learned to live around him.
I lost count of how many times new friends or co-workers would express shock when they found out my dad was actually alive.
"Hold up! You have a dad?!"
"Yeah, my parents are still married."
"But you've never mentioned him before!"
I wasn't intentionally not talking about him; he just was not involved in my life in any meaningful way so he had no context. He was positioned in the center of his drinking buddies, but that meant he was in my peripheral. Either he had to move closer to me or I had to move closer to him in order for us to be involved and known in each other's lives but, personally, being teen surrounded by my father's model of excessive alcohol consumption was probably not where I needed to be if I wanted something different for my life. In the end, we each stayed where we were positioned. Although we lived together for the entirety of my young life, being on the fringe meant my father knew me no better than the kid at Blockbuster.

The interesting thing is this doesn't just happen between alcoholics and their children.

As parents, we get to choose where we position ourselves in the lives of our children. When we make our career our priority we move toward that and our children get pushed out to our periphery.
Excessive volunteering can convince us that we're doing all the good, right things but we have to know that we're also moving your kids to the fringe. (If you're on more than five boards or committees it's time to honestly evaluate where your kids are in your life.)
Making everything about sports and putting the worth of our children in how many baskets they make or how fast their split was centers ourselves with the activity itself and shoves our kids off to the side - especially if they're heart is in music or something else. It's so easy for us to believe that we're doing this for "their good" but unless relationship with our child is at our center we can get off base pretty quick.
As parents, we decide if we want to position our children in the center of our lives or if there is something more valuable to us. And if there is, fine - but own it.
"I never went to any of those art shows my kid was in because they were always held on my bowling league night."
"My kid is really active in drama but I want to focus on my dating right now."
"I don't know anything about the classes my child is taking because I choose to use that time I could be talking with her to instead engage in the chaotic drama with my ex."
Understand that your relationship with your child is on you - not anybody else. You can make all the excuses in the world and I guarantee that if you truly wanted to, you'd be able to position your life to where a connected relationship with your child is at the center. Now, that doesn't mean you give up yourself completely and entirely and do nothing but the bidding of your child. We're talking about something entirely different here (but if that's where your headspace is at right now, feel free to go back to the top of this post and re-read it from the beginning).
It's time we start taking seriously the responsibility we've asked for. For eighteen years, this person who we chose to put in our lives should get our focus and attention.
Do you prioritize parenting or have you found that something else is occupying the center position in your life?
Have you built the kind of connection with your child that lasts beyond just the moments when you're face to face with them?
What do you need to reduce or remove in your current life in order to prioritize the relationship you (should) have with your child?
Now, what are you waiting for? Because no one else is going to make your relationship with your child their priority.
at March 07, 2021 No comments: