My friend, Amber has been living in Haiti with her family for the past 8 years. She spent most of her time in what I would describe as a more rural area, centrally located in the middle of the country. Then she relocated up north. Way up north. Straight to the heart of the city that God told her to go: Port de Paix, or the Port of Peace.

It takes anywhere from six to seventeen hours to get from Port au Prince up to Port de Paix. The vehicle will break down. The roads are predominately gravel, or, as one person described it "like the rocky bottom of a dried out riverbed." That was closer to being right.

Port de Paix is a large city with everything possibly wrong with it. A coastal city with too many people, too much garbage and a variety of rogue pigs wandering around. 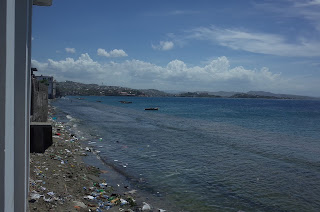 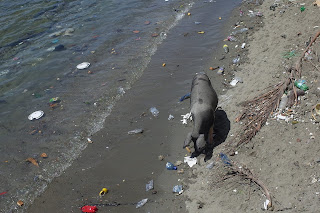 There is a beach just a few blocks from where Amber lives and where the Avery House currently sits. 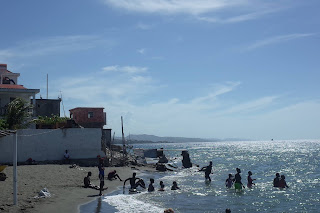 I let Brody splash around in the water. I figure it toughens his immune system. I grew up making mud pies out of cow manure and I turned out fine. I do make him keep his shoes on, though. Way too much broken glass. 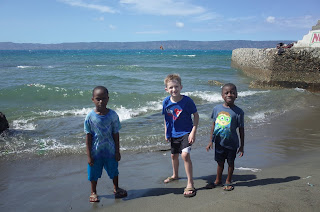 The beach is adjacent to the garbage pit. I'm not sure how garbage gets inside the rock walls but I know both pigs and people scrounging for something worthy can make it both in and out. So can the ocean. It's kind of best not to think too much about it and just be thankful there is a place to cool down in the 100+ degree August heat. 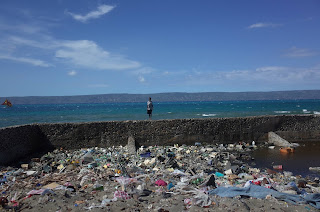 Amber and her husband met a man who happened to be a fisherman and they started talking.

Amber was describing our beaches - the ones with life guards and metal containers for trash and recyclables. A concession stand and cleanliness. I guess we don't really fear the potential of our kids getting lock jaw from the beach. The newly met fisherman said, "I can take you to a place like that."

Trusting the fisherman, they set out together.

It takes awhile by truck to get to the fishing village where the man lives. One of those drives where everything you see tells you you're getting further away from the water and not any closer to it. There is actual cactus growing out here. 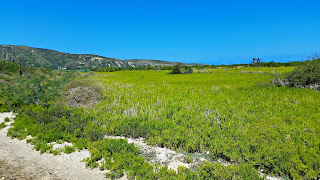 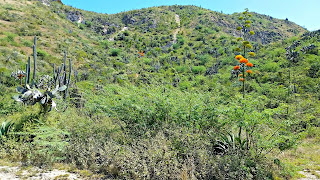 Eventually though, the fishing village appears. Isolated. Desolate. There isn't even a market nearby. But somehow these families have carved out a little peaceful paradise on this great, big planet. 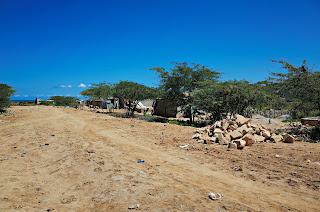 The vehicles park and the people pour out and life jackets are strapped tightly around the littles. This may be Haiti but somethings still require a United States safety net. The ocean is one of those places.

The walk to the shore is short. The same rough path the goats take. It's beautiful here - that is true, but still littered with broken glass and debris that never seems to go away. The shore is lined with old wooden fishing boats. Paint peeling. A graveyard of worn and weary wood. 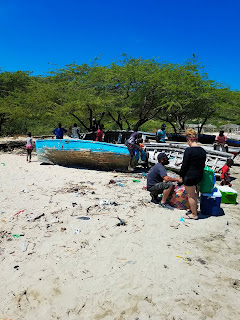 Eyes settle on the boats in the water. Three of them. They look fancy compared to the ones sitting inland, paralyzed in their brokenness.

The fisherman readies his craft and crew. He has a beach, he says. One unlike anything you've ever seen before. I will take you there.

It takes a lot of trust to go off with a man you don't know. But Amber says the peace of God tells her it's okay. She knows something most of us don't: God has plans. Plans to prosper. Prosper even the people of Haiti. She and her husband get on the boat. And when they come back, they know.

That bold offer from the fisherman... that trust to get on the boat. Lives changed on that trip and soon we will understand how.

You see, we too, took this journey. We got in a vehicle and drove to the fishing village and walked to the edge of the Caribbean.

See that old, rickety wooden boat resting on the shore of the Caribbean?
I'm about to put my son in it. 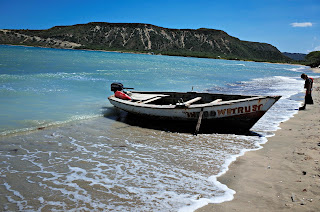 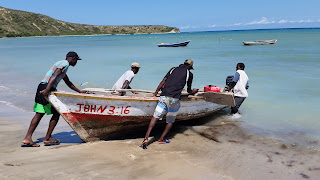 I'm acutely aware that the three girls we have with us can't swim. One says she can but I think she's just saving face. I watched her later trying to learn to float. We split between two boats and put the strong swimmers in with the girls. The mamas stick close to their babies. Life jackets checked two and three times. 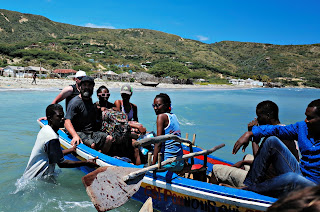 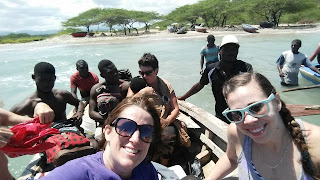 The boat ride is unlike anything I have ever experienced before. At first, it's calm and smooth, providing a nice view of where we launched from. 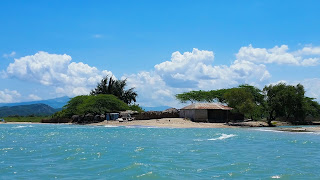 When we get out of the cove the wind and the waves break free. It's the best of any roller coaster I've ever ridden! Salty sea spray washes over us with every crash. I notice they're bailing out water with a tiny yellow plastic bucket.

There is this point in the journey where my head is tipped up, the sun allowing my closed eyes to still experience its glow, and my 8-year old leans over to me laughing, "I can't believe this is my life!" I laugh back at him and hug him tight. Me either, kiddo, me either.

I realize suddenly that we're literally in the middle of an ocean on wooden boats, the hand carved oars smooth from years of use, with no GPS system to be had. No one knows we're here. There is nothing around us but water, yet the fisherman seems to know where to go without any landmarks to guide him.

We head toward a wall of rock, tuck in close to it and follow along its battered edge. There's a point jutting out from the rocks that we'll have to go around... and when we do... 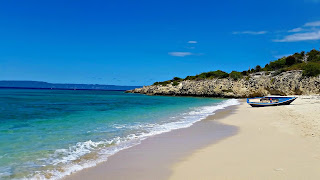 Our very own personal paradise awaits.

How many places like this exist in the world where only a couple of men know how to access it?

The fisherman drops us off, but one man and one boat stays with us. The rest of the crew disappears back around the rocks and into the ocean. For several hours we play. Amber has done this before, she packed peanut butter and Haitian bread and water. I rub layer upon layer of sunscreen on my arms and face and still burn.

These kids deserve to laugh more. They deserve to experience childhood. The girls currently in the Avery House are 18 to 20 years old and yet I watched their eyes fill huge with wonder and fear as we traveled out to sea. I watched them play as if they were still seven or eight years old. They giggle and tease and pout and stomp their feet. Little children trapped inside adult bodies because things happened to them that they didn't deserve. They deserve experiences like this and I want to find ways to give them more. 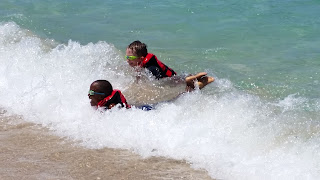 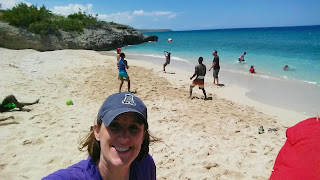 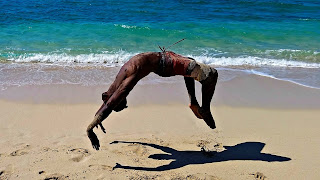 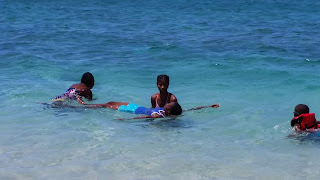 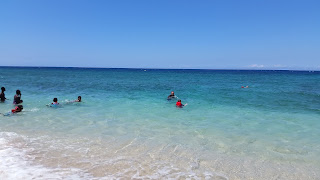 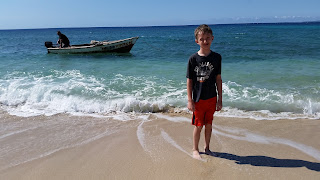 Soon the other boat returns. Bodies are dried off. Backpacks zipped. For some reason the ride back is more solemn. Leaving paradise is always hard. Yet I am so thankful for this opportunity. I  think of my 8-year old's earlier words: I can't believe this is my life! So much had to be broken before I could experience this. So much brokenness in all those people gathered that day on the pristine isolated beach in the middle of the Caribbean.

"For I know the plans I have for you,” declares the Lord, “plans to prosper you and not to harm you, plans to give you hope and a future."  Jeremiah 29:11

I have heard it said that the best growth comes through persevering through trials, not escaping them. And that when we learn perseverance, we find surprising joy. Joy was definitely felt that day.

It was at the end of the journey that I learned what else had been happening while I slathered on sunscreen. After the fisherman dropped us off on the beach, he took to the sea. Using the nets he makes himself, he caught what God provided.

He then took the fish back to his home where his wife and some other village women had been busy cooking. They were to prepare a feast for us: rice, fresh fish, chicken, pikliz (spicy coleslaw), fish sauce and chicken sauce -- a dinner fit for royalty!

The fisherman opened his home to us. We sat under a recently constructed gazebo with a metal roof on what looked like his finest furniture waiting underneath. We ate too much and laughed too loud, agreeing that this was, hands down, the best day ever for all of us. 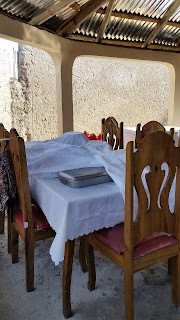 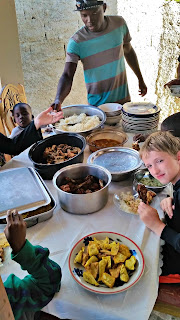 When Amber met the fisherman she didn't know what God had planned. It turns out that first trip the fisherman offered, the one where he said he could take them to a clean beach, led to a new business venture. For $10 American dollars, you can enjoy a private boat taking you to a private, secluded beach, followed up by dinner. Not too shabby of a deal for ten bucks.

It's these interactions that solidify why God wanted us to partner with Amber for the Avery House. Her willingness to meet people where they are, really listen and trust what God has planned makes her unlike anyone I have ever met before. Her talent to take the already there skills and bring them to the forefront of a person's life in a way that creates self-worth, income and dignity is unparalleled.

Her unconditional love for the people of Haiti is what will bring change to the people of Haiti... one person at a time. And it's this same love that will change the lives of the girls at the Avery House.
at May 25, 2018 1 comment: