The American Christian world, it seems, is losing its marbles over the redesigned Starbucks cups. Just in time for the holiday season, the company has intentionally decided to eliminated the words Merry Christmas from its new design.

There are articles splashed across the interwebs of how this redesign is emblematic of the Christian culture cleansing of the west.

There's been talk of boycotts.

You know what I think about this red cup redesign? Good.

Now, before you draft that hate letter to me, let me publicly declare that I am a Christian and I believe God sent His only son, Jesus Christ, to die for my sins. I also believe that maybe this red cup shake-up is getting under our skin as Christians because there's a truth there we don't really want to admit to ourselves.

Because maybe we need the reminder to say it intentionally out loud more often, instead of relying on some printed words on the side of a cup to be our mouthpiece.

Because maybe rushing in and out at the counter for our Gingerbread Latte and tossing out a hurried Merry Christmas over our shoulders as we side step quickly to avoid running into the next customer is not enough anymore.

Because maybe, just maybe, God wants us to slow down and really think about what those words really mean to us as Christians and why it's important we say them.

And maybe it's time that we take that responsibility on personally - and not expect a big business to do it for us.

One of the most interesting internet challenges meant to counter attack the redesigned cup asks people to "prank" Starbucks by giving your name as "Merry Christmas" so they have to write it on the cup. The challenge makes you have to look at the barista and say the words Merry Christmas out loud.

Look, it's not the cup's responsibility to declare your faith and it's not up to a franchise to speak on your behalf. If you truly believe in your heart of hearts that those words need to be said, then you take responsibility and say them. Now, if Starbucks passes some sort of coffee house rule that forbids us from personally saying the words Merry Christmas, well, that there is a different situation that requires a totally different blog post.

An Open Letter to the Girls who Bully Alexis

Thank you! No, really, I mean that. Thank you. Because if it weren’t for you – if it weren’t for the pain you intentionally inflicted and your desire to break one particular human spirit, the rest of us in this world might never have met such an incredible young lady. 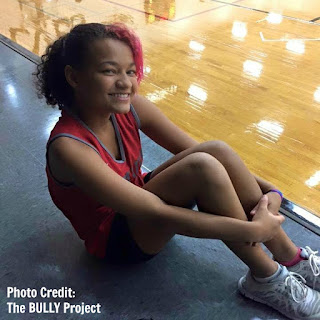 I was so angry when I saw the passionate post her Mama wrote. Reading about your behavior sent me spiraling back to the days when I watched my own daughter get bullied. It made me furious to think of another child so close to my home going through the same thing. Except I wasn’t as courageous as this Mama; I just sat quietly. I encouraged my daughter to let it go and watched her get more and more sullen and depressed because those girls never let up. I made a mistake back then. Mamas need to stand up. Because when one Mama stands up, other Mamas stand up with her.

I pray that you realize it’s time to let up.

Then I started reading more about Alexis. Learning who she is --- and my anger quickly gave way to something else: awe.

I want to introduce to you this beautiful daughter of mine, her mom wrote.

And what an amazing girl we were introduced to!

We read about how Alexis is a talented cartoonist, has an amazing voice, and is full of spunk and spirit, always trying to make others smile. So many of us don’t have half that talent or near that bright approach to life.

We read about the inner strength of this child who has grown up without a father, who has mourned the loss of a sibling, and who is being monitored for a heart condition. Let me tell you: that there is a strength most of us couldn’t imagine enduring, and yet picture after picture shows her smiling and laughing.

And still, there was so much more to Alexis:

She runs marathons to raise money for special causes. At just 13 years old.

She volunteers to wrap Christmas gifts for free at the mall. At just 13 years old.

She volunteers to work at fundraisers. At just 13 years old.

She’s active in her church. At just 13 years old.

As I read, just as thousands – yes, thousands of others read along with me – I quickly came to the realization that this is no ordinary child. This is a girl with a purpose in life that far exceeds the standard middle school expectations.

Alexis has a passion for animals and, with her skills of giving CPR and IV fluids, has rescued and saved animals for years.

And yet her passion extends even further with her desire to find ways to fight against and put a final end to Yulin.

Yulin? I had to admit – I had no idea what Yulin even was.

And here’s where I thank you again. See, I – along with the thousands of other people who were introduced to Alexis, were exposed to something we may never would have been.

I learned that Yulin is a festival in China each year – a grotesque, demeaning, awful dog meat carnival. (I’m warning you, Googling it will result in traumatizing photos.)

There are worldwide petitions and activists determined to stop this atrocity from happening – yet here I was, complacent in my little world of comings and goings and coffee dates with friends that I never even knew it existed. Alexis taught us something. She pulled open the curtain and shined a light on something important that God placed on her heart. We should all be so lucky to have such an audience like the one she has today.

Make no mistakes: there's not a single one of us who feels sorry for Alexis. If that's what you think you're incredibly wrong.

We're impressed by her. In awe of her. We have respect for her. We’re excited to see what else she can teach us, how she will decide to use her voice and undoubtedly how she will work to improve our world.

Thank you. Thank you for allowing all of us to be introduced to Alexis. Because we think she’s incredible.  A shining light for our future. And we're so thankful that she's here.
at November 03, 2015 No comments: