I'm on the front page of the base newspaper, a bulky Kevlar helmet on my head, even clunkier military issued glasses on my face, frozen in time next to a 4-star general.

I'm showing him the results of my target practice. He's smiling, proudly. All the bullet holes in a tight circle in the center. I look bored. 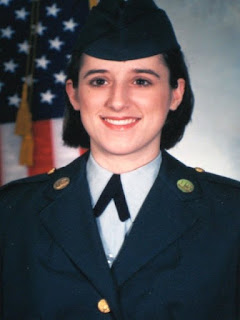 I was woken up extra early, before any of the others. Placed on an old school bus painted drab brown-green. Or maybe it was green-brown. It was so long ago. It's hard to remember the details.

I sit directly behind the driver. Alone. I didn't know who I was with. I didn't ask. They didn't offer.

We drove in the dark. Stopped. Exited.

I stood waiting with two other strangers dressed the same as me. Someone pointed. The three of us, strangers to each other, walked away.

I found the perfect spot up on the wooded hill. Covered in camouflaged face paint - the most make up I'd ever wear on my face, covered my body in tree branches and leaves. Waiting in the wide open where no one could see me.

Dark can hide the shape but can never hide the sound. They thought they were so good, and maybe they were... but they weren't silent.

If you quiet your mind and slow the beat of your heart you can hear everything you need to.

The stranger-sergeant low-crawled, angry-advanced screaming directly in my ear: at least let them get halfway way up the goddamn hill, private! I still feel the sting of his spit on my face just under my right eye.

Isn't that what we were supposed to be doing? Playing pretend so they could do the real thing? Who was going to tell them that when they left they wouldn't even make it halfway up the hill? 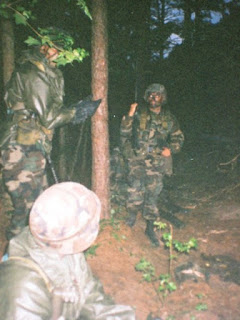 Night drill. We flooded a concrete bunker in silence. And waited. Waited for what seemed like forever in the frozen night air. If there was light, maybe I could see my breath.

Suddenly, chaos from all sides. We scramble over the too-tall bunker wall into a make believe hell.

Artillery lights the sky, explosions next to our bodies, wriggling on our backs through puddles, all we had to do is get through.

But one body stayed under the barbed wire. It was no longer make believe. Two drill sergeants drag him out. They said it was a heart condition. But it was just supposed to be pretend.
There was this thing after boot camp - a graduation of sorts where family could fly in, take pictures, tell you how amazing you are, take you out to a fancy restaurant. The majority of the recruits had no one come. They went back to the barracks. Became their own family.

Me? Well, the unromantic explanation is I flunked out of college. I had already been disappointing my parents for the majority of my existence, so there was no use trying to go back down that route again. I was working part-time at a gas station; hardly enough to pay any rent. I didn't know what to do with my life and there was some sort of recruiting station in town. I walked in and signed up. It was that thought out. I needed a place to live and a job. Two birds, one stone. Done.

For a long time I didn't consider myself a veteran. I was a cocky young kid who had failed and just needed a place to go. The military took me in. I have a copy of my DD 214 but have never cashed in any of my long-ago promised benefits. I never used my GI Bill to go to finish school because somewhere along the line society convinced me that I wasn't "veteran enough." I was never deployed overseas, never saw combat, never killed anyone in action. I was in the very first class the Army offered Automated Logistical Specialist training. I graduated second in my class. We learned how to keep track of inventory on a computer. That hardly seems like a reason to benefit from a VA Loan.

Let's be honest, compared to Gung-Ho Military Guru Guy, the rest of our squad was pretty, well, basic.

But with age comes wisdom. And here's what I know now:

Those misfits? Those escape artists? Those family-less? They are brave. They are courageous. They saw real-life combat in a way many of us take for granted. They choose to put our country first, even if it is because it's their last resort.

So, as we're going around celebrating our loved ones who wore the uniform: the ones we have a plethora of pictures of and love letters from; the ones we finally received the phone call from; the ones with the funny stories about how their Drill Sergeant embarrassed them for getting your care package with the chocolate chip cookies and the card sprayed with perfume... think about the others.

Think about the soldiers who go through the entirety of basic training ang AIT without a single letter received nor a single phone call to make.

Think about the soldiers who stay on base when it's a holiday because they never had the benefit of a family.

Think about the soldiers who recognize the irony of ensuring you have a safe life to live because they had to escape their dangerous one.

Think about the accidental veteran. The one who never once saw themselves as a soldier but somehow ended up there.
at November 11, 2019 No comments: