The Resolutions that Matter

I have a love/hate relationship with New Year's.
On the one hand, getting sloshed and insluting your wife or driving drunk and wrapping your car around a tree just doesn't seem like the right way to celebrate anything in life. I also have a hard time with the comments that stem along the line of we made it through this year! because what about the ones that didn't make it through the year? In my admittedly oversensitive heart you just called a bunch of my loved ones failures and they are nothing of the sort. They simply didn't have the choice to finish off the calendar year here on earth. And that hurts. Thanks for the reminder.
But on the other hand, I love a makeover. There is something incredibly empowering  about washing over the old color of a wall with a new one, symbolizing a new start, a fresh start, a chance to finally get it right.
Resolution suggestions abound the interwebs: lose 10 pounds, stop smoking, drink more water, save $10,000 and finally take that trip to Fiji. They all seem so.... selfish.
How does it improve the world if you vacation in Fiji? Yes, yes, I know... you'll be better rested and relaxed and therefore more pleasant to the populous at large. I get it. I really do. But, well, I want more.
I want to make resolutions that matter.
I want to spend less on frivolous things (like soda and pens) so I can sponsor children that otherwise won't have access to safe drinking water or an education. I go out to dinner and it's an easy $30 -- if I eat out just one time less each month I can sponsor another child. So maybe you stop smoking and use the money you would normally spend on cigarettes to sponsor a child of your own.   {you can go to www.gvcm.org to do just that}
I want to travel internationally - by going to Haiti on more mission trips and encourage others to go, too. I know people who have served in Honduras and Costa Rica and Moldova... and they keep going back. They need to go back. Their heart calls them to it. So, maybe you save Fiji for another year. Why not consider a short term mission trip? You could always stay on for another few days or a week to view things as a tourist.
I want to save more so I can give more. Clipping coupons and Kids Eat Free deals are great... but  they're even better when it means the free meal is being shared with a foster child. Have you considered fostering? Have you considered a program similar called Safe Families? Save $25 extra out of each paycheck and use it to buy supplies for your local homeless shelter. Take those buy one get one free foods and donate them to your local food bank.
I want to lose weight - but the weight I really want to lose is the heaviness of a materialistic life that tries to convince me I'm not successful unless I am surrounded by the $78 frying pan and the $65 shower curtain. Instead I want to live simply so I have the means to provide more for others. I want to pack food for the hungry and deliver Meals on Wheels and mentor a single mother who has somehow bought into the lies that all she knows how to do is make mistakes. I want to lose the weight of the world and pack on the pounds of love needed to serve God's people of the world.
I want to make resolutions that matter.
Because if I don't make it through 2015, I want to at least be known as someone who tried to make a difference with the time she had.
at December 31, 2014 1 comment: 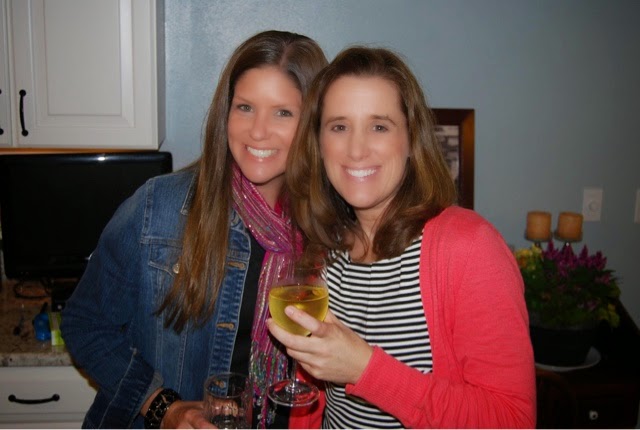 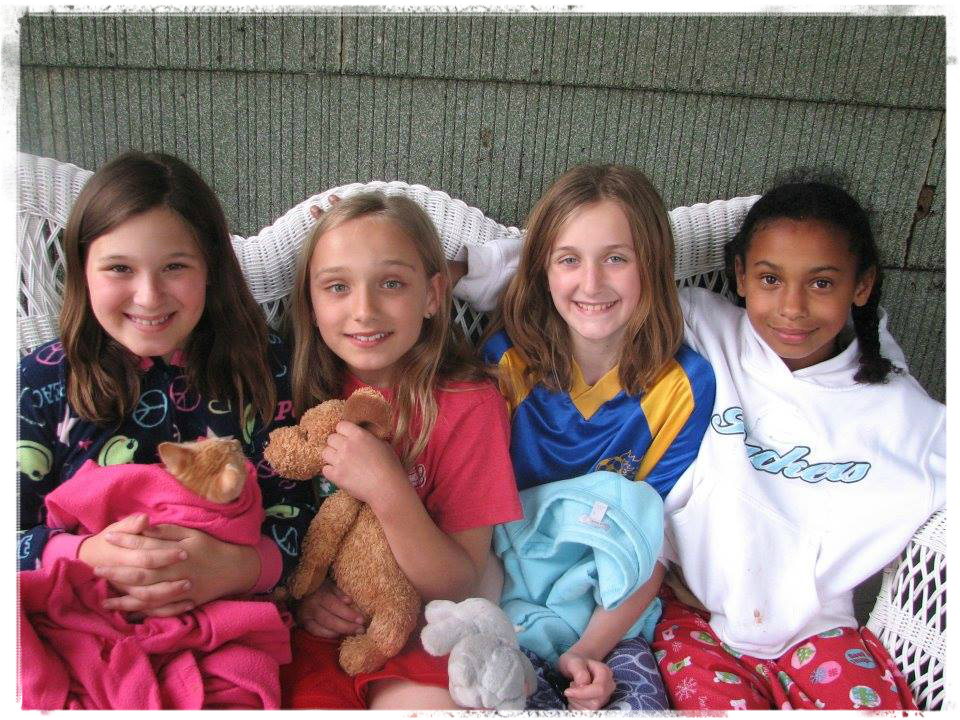 This picture has been printed in various community newspapers in the past two years. It shows my precious daughter, Avery - second from the right - smiling with her sweet friends at a sleepover at Katie's house.

Too soon after this picture was taken, Avery passed away as the result of a car accident.

Too soon after Avery died, another little girl in this photo was called home to be with Jesus.

You guys. My heart.

Lilly, the precocious young lady on the far right on this photo with her arm around Avery, was full of so much life it is impossible to think she would ever leave this earth.

She cracked jokes and asked bold questions. She laughed out loud and made me shake my head at how insanely wise she was about things you wouldn't think a kid her age would be. She never made any excuses for herself and taught me a great many things about being bold. She played football with the boys. She played hard. She played good. She played real good.

And just like that. Gone. The most audacious child I have ever met is gone.

No warning. No explanation. Just - suddenly not here.

And it dawned on me that I know her pit. I know that darkness.

I know the struggle to breathe and the way it suddenly hits you like a bat to the heart: how can this child just be gone?

You guys. This story hits too close to home.

Not just to me... but to our entire community.

Extra psychologists and counselors are called in. Again.

Kids are suddenly made aware that it's not just our old grandmas and grandpas and the great uncle you have never met that die - it's your friend, the kid who sits next to you in Math class, the girl at the bus stop. Again.

I don't know why this happened but, yes, I still have faith in my God. Faith that He is good always. Faith that he will redeem all things and he will use this in the most magnificent, glorious way ever. Even when my heart feels like it's in a million pieces and I want to rage out and scream at God, "seriously?! From the same group of friends? What is wrong with you that you think this is a good idea?!" (Don't worry; my God knows I wrestle hard.)

I don't expect an answer right now. Or in the next couple days. But I know there is one. And I trust Him.

Friends, a whole family has been plunged into sudden darkness. We need to shine our light. We need to keep shining because there will be a moment between the tears that a small sliver of light will sneak through and give hope. If we don't shine, they won't see it.

Don't over think things: send the card. Drop off toilet paper. Deodorant. Dish soap. I don't care if you don't know the family. They don't care. Trust me when I say grieving Mamas aren't going to even remember who was around them... they just remember someone was. And people holding you up always feels better.

Don't forget Lilly's siblings. They're grieving, too. Many times, it's the kids that get overlooked. Not because their grief isn't real and huge and hard; it's just that Mama grief usually gets top billing. And it's just not fair to the kids.

Be sensitive. I know you're craving to know what happened - it's natural. (I think we do that so we can fake ourselves into thinking we'll be safe. I don't drive on the highway so I won't crash. I don't smoke so I won't get cancer. I don't go hunting so I'll never have to worry about a random bullet.) But, friends, please, please, PLEASE stop publicly posting, "how'd she die?" on Facebook pages. There is (1) a private message option you could use and (2) something called decorum. A simple "thinking of the family" or even just typing "so sad" sounds a whole lot better than "what happened?" That just makes you sound nosey. And insensitive. No grieving family needs that. Not know. They want messages that give them hope - not remind them that the crappiest thing in the world just happened to them and you're antsy to know the details.

Be kind. To everyone. Lilly was audacious! I just cannot think of another, better word to describe her. She was genuinely incredible. I think of all the light she herself spread in our world and cannot imagine that light ever being extinguished. I just know that YOU can spread light in her honor. Think of how awesome it would be if everyone who knew that spunky smile or was touched by this story decided to start shining their light a little brighter? Man, how this world would light up! #lightforLilly  Do it. Make this world a better place with your smile and genuine kindness. That's what she did.

And on a practical level, if you can, financially support this family. They'll never ask for it. Not in a hundred years. So, we'll ask for them.

Funerals are expensive. Did you know there's an extra charge for digging during the "frozen" months? Headstones. Funeral luncheons. Not to mention the hospital charges. The grief counseling the members of this family will need. They'll want to print every picture ever taken. There's a charge for that, too. No one budgets and saves for this. So, maybe you have an extra $20 you were going to spend this week at the movies. Rent one from RedBox instead and donate $19. You can do that here: GoFundMe: Lilly Perry

And pray. Lilly believed in God. Her family does. She's probably tossing the pigskin around with Jesus now. Or maybe she's just walking alongside him asking all the hard questions that she always wanted answers to. Whatever she's doing, I know she's there. And she'd want us all to pray for her Mama and her siblings. She'd want us to pray for all her friends who are grieving all over again. (Two deaths in two years is going to leave lasting effects on way too many children.) So pray. If nothing else, pray.