There was a gaggle of boys at the pool yesterday. Ten years old, maybe eleven. Jumping all over each other, laughing, dunking heads beneath water.

I found myself watching from my chair, laughing when they laughed even though I had no idea what was so funny.

I turned toward my own son struggling his way down the length of the pool, his instructor at his side, voicing words of encouragement every few strokes. He hates the front crawl. His strongest is the elementary backstroke. He could float on his back for days. I could tell from where I sat that my boy did not want to be doing that front crawl.

The boys pulled themselves out of the water. Skin and bones dripping as they pushed and pulled each other toward the locker room.

"I wonder what Brody will be like if he gets to be that age," I thought.

I snapped aware: what do you mean if he gets to be that age? I chastised myself. What kind of mother thinks like that?

But there's a truth in that. A hard, scary truth that mothers who have lost children know without ever wanting to. There is no guarantee.

Now, before you go all thinking how morbid and awful that is and judging me thinking I haven't figured out how to effectively grieve the loss of my daughter, I invite you to look at things from a different perspective....

I have no preconceived notion of what my child is supposed to be like. Because I know that time on earth is not guaranteed, I can simply enjoy him. Every second of every day he is here amazes me.

I don't care if he plays sports or chess -- as long as I get to see him smile.

I don't care if he considered cute by the girls or a gawky dork -- as long as I get to hear him laugh.

I don't care if he excels at Math or changing carburetors -- as long as I get to listen to him tell me what he has learned.

I don't care who he asks to prom -- as long as his heart skips a beat when she enters the room.

There is a beautiful gift given to parents who have lost children.... an ability to see life for what it is: a moment to be treasured and enjoyed and poured into. Whether we get one more moment or a thousand more - each and every one is a sacred gift. We don't squander them.

Yes, I wonder what my son will be like if he gets to be ten. I do so pray the Lord grants me that. But in the event He doesn't, I'm not going to waste my time wishing my child was someone he isn't.
at September 08, 2015 2 comments:

The Way this was Supposed to Be

This school year was supposed to be the one that officially began Brody's elementary education while ending Avery's. They were supposed to be at school all day, together. Sibling bookends - one in Kindergarten and the other in 8th grade.

This was the year my kids would finally eat in the same cafeteria during the same lunch hour. Their daily schedule lining up just so.

This year Avery was supposed to be at the top of the student food chain. The treasured final year, filled with class fundraisers and a class trip where the students slept in hotel rooms in Minneapolis or Cleveland or St. Louis - the location something they were supposed to pick together.

This year Avery was supposed to take her graduation photo which would hang forever in the halls of the school. In the same hall that held the graduation picture her grandmother is standing in.

Brody entered Kindergarten alone. His title of Younger Brother crossed off and Only Child penciled in above it.

Instead of watching Avery walk into school as an 8th grader, I marveled at how big the Tulip Tree planted in her memory at the front of the school property has grown in just a couple years.

Instead of meeting with her teachers during Back to School Night, I held back tears.

In Brody's classroom, parents sat on too tiny chairs, our knees up past our ears, as we watched our squirming children on their carpet squares. Each child introduced their parents, we described our families.

"Our oldest daughter is actually relocating to Australia and is traveling there as we speak," I began. "And we sponsor a 16-year old boy in Haiti, so we have a son there, too." Before I could say anything else, Brody piped up, "And my sister, Avery, died and is in heaven."

God has blessed me with many children... but He has placed them where I can not easily reach out to touch them.


There's a new music teacher at our school. She sent out a request to borrow any available acoustic guitars so she can teach students.

Avery's guitar has stood silent since she died.

I dusted it off and brought it to the school. Our family's last name written on a piece of masking tape on its back. Ready to be picked up again. Eager to make music.

This is the year my oldest has moved to Australia, my youngest has entered Kindergarten, and the son I share waits in Haiti. This is the year Avery makes music through the halls of the school she loved so very much.

And this is the way it's exactly supposed to be. 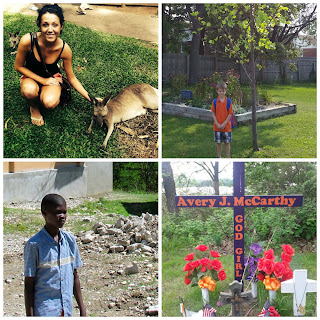